Join us all week, as we explore one of the most beautiful gardens in the world. Learn how one woman turned her passion, Lotusland into a living memory for us all that helps inspire our own connection to nature.

“One need not be in California long before he feels his soul beginning to stir. The air is magnetized…the consciousness awakens …the soul must speak.” Ganna Walska, the flamboyant opera singer who wrote those words in her memoir, had not merely tired of New York. After a six-week stay in the Hollywood Hills in 1940, the 53-year-old Mrs. Walska truly believed that her destiny lay in this “sunny land” where “people are decidedly more interested in your being than in your pocket.”

Hollywood couldn’t event this story– there isn’t actor alive today that could play the part, except, well, maybe Meryl Streep. No! She’s hasn’t had enough experience– with men.

There’s Always Room At The Top is an autobiography of Madame Ganna Walska. She hailed from Brest-Litovsk Poland born Hanna Puacz on June 26, 1887 and became an international celebutante with an eye for the dramatic and a penchant for collecting flora– and men. Throughout her tumultuous operatic career, it was not her voice that attracted attention and notoriety, it was her singular beauty. And the attraction to men of great fortune was as natural to her as a bee to pollen. She had six husbands including a count and yoga guru.

A spiritually enlightened women of humble origin with an eye for eccentricity and a passion for her horticultural collection led her to create one of the most magnificent estates in all the world. Lotusland was and remains her life quest. Today, Madame’s collection includes the most sought-after, rare and exotic specimen plants in all the world. 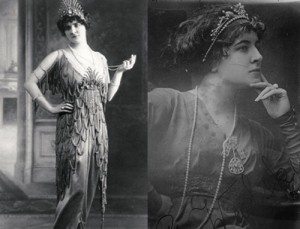 She loved the color green in all contexts– especially men that had plenty of it. Her proclivity to attract men of great fortune began in St Petersburg, Russia. At the tender age of nineteen, she sat before a royal artisan having been chosen as “the most beautiful woman at a royal ball.” At the ball, the Czar chose her and today, a painting known as “the Czars portrait,” remains in a private home in the custody of her niece in Montecito, also the home of Lotusland.

Her passion to build and preserve what critics have acclaimed as one of the most important horticultural collections in the world began with a desire to share her wealth of knowledge. But to accomplish her dream she had to make many sacrifices. Raised as a strict “Catholic,” she was molded by her religion and her relatives to be a nice girl. The marrying type for life. But somehow when she eloped as a teenager with the Russian Count, Arcadie d’ Einghorn, in 1915, she was tired of pretending to be the dutiful wife. Divorce was the only way to recover sanity and self, as she no longer could tolerate his drinking and carousing.

Her operatic career took her to Europe where she adopted the name Ganna Walska. Ganna as the exotic Russian name for Hanna and Walska derived from her love of the Waltz.

With the threat of World War I, Ganna moved from Paris to New York where under the auspices of having become an international opera star, she met Dr. Joseph Fraenkle who nursed her injured larynx and soothed her desperate desire for financial security and a home. But having a roof over her head did not distract her need for finding the wealthiest man in America. 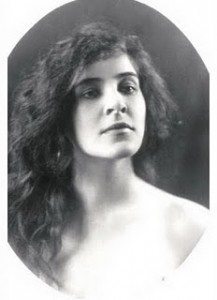 It was at this time that Walska met Harold McCormick – heir to the International Harvester fortune and a generous supporter of the Chicago Opera Company – and began what was to become a lifelong relationship. Ganna also took up an interest in mysticism and “the meaning of life,” participating in séances, consulting Ouija boards, practicing yoga, and exploring astrology, meditation, and telepathy.

In April 1920, Fraenkel died after a prolonged illness. Exhausted and depressed, Walska decided to holiday in Paris. While on board the Aquitania, she met Alexander Cochran, then known as “the richest bachelor in the world.” Even this distinction did not make him immune to Walska’s undeniable allure. He proposed to her the day they met – she refused and only relented after several months and four proposals. Alec turned out to be, in her own words,  “the most miserable man I [Ganna] have ever met,” becoming increasingly jealous of her career and continuing friendship with Harold McCormick.

In her memoir, There’s Always Room At The Top, Madame portends in what was fast becoming a trend, McCormick had fallen in love with her when they first met, and had divorced his wife, Edith Rockefeller, so he could be free to marry her. When Walska finally divorced Cochran, McCormick immediately swept her off her feet. As she recalled, “The stories of my divorce from Alec Cochran had hardly quieted when those about my marriage to Harold McCormick began.” A devoted husband, McCormick continued to support and finance Walska’s predominately failing opera career, purchasing the Theâtre des Champs Elysées in Paris as a venue for her to perform. In 1931, as she refused to leave Paris and live with Harold in Chicago, he divorced her on grounds of desertion.

With her singing career on shaky ground, her fourth marriage over, and her youth a thing of the past, Walska’s search for “Truth” and the “Great Purpose” of her life became reinvigorated; she gave up extravagant parties and declared that there would be “no more waiting for Prince Charming!” But Walska couldn’t escape the amorous overtures of male admirers. She was introduced to Harry Grindell-Matthews, inventor of the Death Ray – an “experimental device that could disable car engines by remote control” – and while they shared a love of opera, she found him quite unattractive. He became so depressed at her rejection that he stopped working, and amazingly, government officials intervened on Harry’s behalf, “as it was feared that [Ganna’s] indifference might kill him before his invention for detecting submarines and defending London…could reach the hands of the War Ministry.” Unfortunately, he proved to be another miserable and jealous husband, so Ganna took the impending Second World War as an excuse to go back to America and was informed by telegram when Matthews died of a heart attack in 1941.

As if life had not given her enough lemons to squeeze, most of them husbands, back in New York, she began writing her memoir. And to keep her beautiful figure she sought enlightenment first and took spiritual seminars which included yoga lessons. She fell in love again. This time with a man much younger than herself. Theos Bernard, known as “The White Lama,” a title earned from his experiences in Tibet. Twenty years her junior, Bernard quickly became the main influence in Ganna’s life, eventually encouraging her to purchase the California estate known as Cuesta Linda, and renaming it “Tibetland.” It was intended to be a retreat for Tibetan Lamas and a place for the “execution of Bernard’s sacred work.” Ganna and Theos eventually married in a secret Las Vegas ceremony, but marriage did not improve Bernard’s insecurity and fierce mood swings. After a disappointing marriage and contentious divorce, Walska was finally able to declare her independence and renamed her estate “Lotusland” after the rare Indian flowers in her lotus pond.

Symbolizing spiritual renewal, the lotus flower was and remains a fitting symbol for Madame. 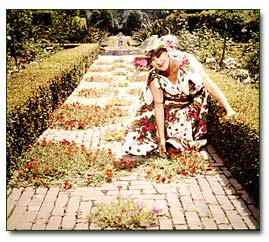 Walska spent the next forty years of her life at Lotusland, dedicated to designing her gardens and acquiring an amazing variety of rare and exotic plants. Her taste for the theatrical and the extravagant carried over into her gardening and innovative landscape design. One of Madame’s landscape designers described her aesthetic in this way: “She has an artist’s feeling, using plants instead of paints for stage settings.” Madame Ganna Walska died at Lotusland on March 2, 1984, leaving her entire estate to the Ganna Walska Lotusland Foundation, to insure that her legacy would remain in her gardens.

I had the honor and privilege to take LuxEcoLiving to Lotusland. Thanks to Gwen Stauffer, the Executive Director, we were treated to tour the sacred gardens of Madame and learn about every single specimen she adored as if they were her children.

A lasting legacy, one that you will never forget, please join us on LuxEcoLiving TV for a special look behind the thirty-seven acre garden walls.