The Advent of Lignocellulosic Ethanol is a Biomass Boon 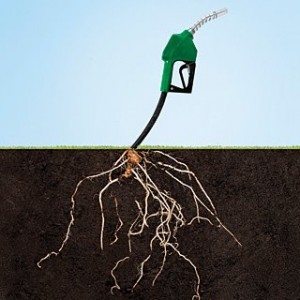 There are a myriad of alternative fuel breakthroughs that have been discovered this century–hydrogen fuel cells, ethanol, biodiesel, etc.–but there is one, recently discovered energy source that you either may not have heard or know little of. Enter leaf biofuel.

As it is scientifically labeled, lignocellulosic ethanol is the progeny of refining biomasses such as wood, grasses and/or any non-edible parts of a plant. It is a potentially sustainable and renewable biofuel, like using vegetable oil to produce biodiesel, however the insubordinate and resillient nature of this biomass make it problematic for industrial applications.

Scientists discovered some time ago that the stalks and straws of plants harbour a great deal of energy in the form of lignocellulose. Xylan, a significant component of substance, is an extricable sugar that is paramount in producing the fuel via fermentation.

The problem with this, however, lies in the cellulose and hemicellulose components of lignocellulose that bolster the structure of and rigidity of the plant. These two substances have to be broken down to gain access to the xylan, which will render the plant weak and therefore perishable.

The methods for extraction are also quite costly–it uses both enzymatic hydrolysis, the process of using water as an enzyme to diffuse macromolecules from food or other biomass, and pretreatment (in this case, chemically). It takes up to 100 times more enzyme to achieve results as opposed to using the same process on starch.

Since the idea is to reduce labor as much as possible, the goal is to make the process as expedient as can be. A few fortuitous scientists in the United Kingdom may have provided some leeway to that possibility.

Researchers at the University of Cambridge identified two genes that give lignocellulose its strengthening attributes last September. Continuing their work, they also studied a genus of flowering plants known as arabidopsis that lack those attributes in their genotype. One of the famous plants in the family, thale cress (Arabidopsis thaliana), has been a multi-purpose focal point in scientific research for more than 20 years and is the only plant to have its entire genome sequenced.

Another area of botanical analysis is the family of Zinnia plants, specifically Zinnia elegans. They are common garden plants that contain a rich source of lignocellulose in their seedling foliage and roots.

As such, efforts are focused on protein-engineering and genome-sequencing to increase overall efficacy in both extracting lingin and promoting higher lingin content in plants respectively.

Scientists have vetted protein-engineering as the optimal tool for creating enzymes (properly known as cellulase) specifically for lignocellulose ethanol production, possibly in lieu of hydrolysis. It is still far from perfect, however, considering the extant issue of accurately screening the right cellulase for the job still effectively hinders progress.

Genome-sequencing, as its name implies, allows direct control of a plants offspring; augmentation of certain genetic traits coupled with the abatement/elimination of others is the only sensible method in increasing desirable a phenotype for fuel production.
Once these hurdles are overcome, this type of biomass/ethanol fusion may well be the ultimate successor to petrol and other harmful fossil fuels.

Want more? Take a look at some practical applications for this promising fuel source.

Apple Will Get The Job Done!