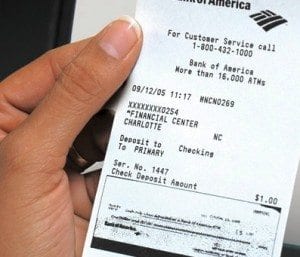 Every day in the United States, millions of store transactions take place, and cashiers and clerks hand over receipts to their customers. What these clerks and cashiers may not know is that they may be exposing themselves and their customers to the dangerous toxin BPA (Bisphenol A) which has been linked to reproductive and behavioral abnormalities as well as certain cancers. While many consumers have become enlightened to the dangers of BPA in certain types of plastics, many may not be aware that some cash register receipts are coated with the substance.

Recently, the Environmental Working Group (EWG) , a research organization based in Washington, D.C., collected receipts from fast food restaurants, big retailers, grocery stores, and gas stations in seven states and the District of Columbia and had the receipts tested at a well-known lab. The lab found that 40% of the receipts were contaminated with high-levels of BPA.

Additionally, a study conducted by John C. Warner and published in the July 28, 2010 issue of Green Chemistry Letters and Reviews, found high levels of BPA in receipts collected from several Boston area stores.  The study showed that eight of the ten stores were using receipts with significant levels of the toxin.  John C. Warner is president and chairman of the Warner Babcock Institute for Green Chemistry in Wilmington, MA.

According to the EWG, the amount of BPA found on some of the receipts was 250 to 1,000 times greater than the amounts found in other sources of BPA exposure that are more widely known, including canned foods and baby bottles. Federal data obtained by the EWG indicates that retail workers on average carry 30% more BPA in their bodies than other adults.

The EWG study found that several well-known retailers, including Target, Starbucks, and Bank of America ATMs, used receipts with very low or no BPA residues, but some big chains used BPA-laden paper in some outlets and not others.

The Environmental Protection Agency (EPA) has launched a program to evaluate the safety and availability of alternatives to BPA in thermal paper, while the largest manufacturer of thermal paper in the United States, Appleton Papers Inc., no longer uses BPA in its products.

Until BPA is banned in all cash register receipts, the EWG recommends the following:

• If you save receipts, save them in a separate envelope.

• After handling receipts, wash your hands thoroughly before preparing or eating food.

• Don’t use alcohol-based hand sanitizers after handling receipts; they can increase absorption of BPA through the skin.

A tribute to Nora Ephron: Why I don’t feel bad about...