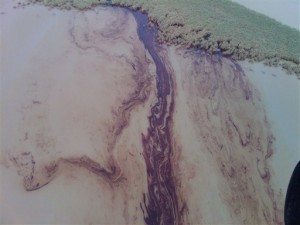 As an ungodly amount of oil spills into the gulf at an estimated 12,000 – 19,000 barrels a day with apparently “no end in sight” (says CNN), it can be unnerving to be a concerned citizen at the time of all this madness. The efforts to stop the spill will be handled, in most part, by the overwhelmingly large powers of the US government and the British Petroleum company. Knowing them, they’ll probably have to futz around for what will seem like an inappropriately long time before the leak stops gushing. And in the meantime, it’s not easy to watch on as an epically unnatural disaster plays out on our television screens.

For Summer Burkes, standing idly by was not an option. She’s been working alongside San-Francisco based non-profit A Matter of Trust in a worldwide effort to clean up the spill using natural hair. A Matter of Trust has been collecting hair clippings from whoever will give. They’ve gotten contributions from a spectrum of well-wishers from local barbers to llama farmers. They boast hair donations from places as far-reaching as Australia and Norway. Once the hair arrives, it is stuffed into cleaned pantyhose to create makeshift booms, which are then sent to warehouses in the gulf.

Hair works really well to clean up oil. For the uninitiated, let me just tell you, it’s sort of amazing. Watch this video demonstrating the wonders of natural hair booms versus the lackluster synthetic booms that BP is pushing. “Why do you think it’s so hard to clean off the animals?” Summer explains. Oil gets all up in animal’s hair. That’s because hair absorbs oil like Samuel L. Jackson sounds bad-ass. It’s just natural. Simple enough, right?

On the front lines, however, Summer is finding it incredibly difficult to implement the booms. The resources are there. There’s a full warehouse full of booms in New Orleans waiting to be deployed. The problem is that BP is reluctant to integrate the hair boom into their clean-up program. Instead, the company is relying on synthetic booms which they believe to be more efficient. Of course, it’s in BP’s best interest to go with the synthetic booms. BP is directly linked to the synthetic boom’s production, and therefore cut their losses with this choice, however sleazily non-renewable it might be.

No one can deny how ungraceful the response to the Deepwater Horizon fiasco has been. The ordeal’s even inspired its own satirical twitter feed. The attempts to stop the oil have been completely absurd, with the token proposition of golf balls blocking the hole representing just how much head scratching is still happening on the corporate end. The grassroots efforts associated with A Matter of Trust are pushing hair-boom zambonis and crab traps filled with booms as viable ways to capture oil as it hits shore. It’s McGyver status on either end; why exclude a legitimately useful way to do something about this disaster?

While BP is trying to make it look like everything is under control they are foolishly dismissing the people that are ready and willing to solve the problem. BP shunned these guys in their May 21st press release, where they publicly asked “Individuals and organizations… to discontinue the collection of hair for the hair boom.” Considering this rejection, one might expect Summer and her crew to flip the bird to bureaucracy and start a renegade clean-up on their own. The truth is, however, that at the moment BP has all the dumpsters on lock down. To work around this, the team is working on getting contracts for an incinerator to dispose of the dirty booms. They are holding back the clean-up until they have a legally and logistically sound way to dispose of the refuse, which is good news for those who hate seeing the good guys end up with criminal records.

Here’s a long-term consequence of the oil spill that few people are talking about: the degradation of the wetlands will have a direct effect on future hurricanes in the gulf. Hurricane season is coming, and these storms will be bad. Really bad. The wetlands serve as a natural buffer to fierce weather, which occur regularly in the area during the late summer/early fall. But years of environmental negligence have allowed the wetlands to wither, and right now they are practically on their last legs. Meanwhile, global climate shifts have caused severe storms to occur more often. This report from the New Orleans storm authorities claims that the coming season will likely be the worst since 2005, when Katrina irreparably devastated the region’s way of life . Apparently President Obama has been informed and gave a reassuring speech on the matter, but his response to this disaster, should it hit, will truly be a test of his leadership.

Personally, I’m wondering when BP will realize what good public relations they’ll get for embracing grassroots efforts and green technologies. Even if they don’t come around, Summer’s crew is working out the logistics of how to provide community leaders with hair-booms, should they want it. If it was up to her, she says, she would implement a long-term government sanctioned program; one that could employ the fishermen put out of work by the spill to restore wildlife in the area. It would essentially be the WPA (http://en.wikipedia.org/wiki/Works_Progress_Administration) of our time. Frankly, that’s the best way to deal with this wretched catastrophe that I’ve heard so far.

This oil spill is incredibly f**ked up, but there are still things you, average person, can do about it: Fill out this form which will go straight to the inboxes of the mainstream clean-up. Tell them to use renewable resources like hair and hay. Tell them not to use Corexit, the chemical dispersant which has an unknowable effect on the environment, but rather oil eating microbes. Also, here’s the Greater New Orleans Foundation donation site. These are the ways (that I am aware of) for us as normal citizens not in the gulf area to do something about the disaster. I shouldn’t have to tell you to take advantage of them.

The hair collections are still on, and the oil is still gushing. This mess is not going anywhere. It will be something we as a country will be dealing with for years to come. We might as well get on it. Get in touch with A Matter of Trust and start a hair drive in your neighborhood.

Here’s a link to Summer’s blog. You should go there. It’s pretty amazing.

Look at this to find some twisted humor in the madness.