California leads the nation in having  preserved one of the most historic coastal parcels of eco rich grazing land.

“Oh, give me land, lots of land under starry skies above don’t fence me in

George Randolph Hearst Jr. was named after his father and his great-grandfather. The first George Hearst was a successful owner of silver, gold and copper mines who became a United States senator from California and, in 1880, acquired The San Francisco Examiner as payment for a gambling debt. Seven years later, Senator Hearst turned over control of The Examiner to 24-year-old William Randolph, who had dropped out of Harvard, “and to the surprise of everyone made it a success,” said David Nasaw, author of “The Chief: The Life of William Randolph Hearst” (2000).

The name Hearst is synonymous with success.

William Randolph Hearst was the first media mogul, because he expanded his newspaper empire into magazines, newsreels and radio and now,  generations later, that same sense of rugged individualism has been passed on.

It may have been his calling. Stephen Hearst is the great grandson of William Randolph Hearst the man responsible for the creation of The Hearst Castle. History unwinds and always amuses. The apple did fall far from the tree when his roots steeped in privilege became  more than just a philanthropic rite of passage; he fought to enable a precious legacy, not architecture, antiques or art but land and lots of it!

Land matters more to Stephen now than it did when he was a kid living on literally thousands of acres under western skies. The impression that solitude brings helped to create his destiny.

It is after all, not his alone. Thanks to the generosity and brilliant negotiations between the state of California and the Hearst Corporation, which continues to grow real estate, cattle, and media, under his leadership, the Rangeland Trust and the American Land Conservancy partnered with the State of California to preserve 128 square miles of pristine rangeland known as the Hearst Ranch that includes 18 miles of spectacular coastline along the scenic Highway 1. This landmark conservation deal was the result of conservationists, agricultural interests, environmentalists, local communities and the Hearsts working together to preserve some of California’s favorite views.

Listening to Stephen recount the pleasure and angst during prior negotiations is like watching a classic episode of Meet The Simpsons. Stephen, a brilliant conservationist and rancher, having turned down an ample offer from The Nature Conservancy, check in hand,  simply asked the leading nonprofit to exit the ranch with these kind words, “thanks very much for the offer but when you leave the Hearst Ranch don’t let the gate hit you in the butt.”

The multifaceted conservation plan implemented by the Hearsts marked one of the largest land conservation transactions in the state’s history, and one of the most significant coastal land gifts ever made to the state of California. The $95 million agreement took more than six years of planning and was approved unanimously by all state agencies with oversight, including the Coastal Conservancy, the Wildlife Conservation Board, State Parks Department, California Transportation Commission, and the state Public Works Board as well as several environmental and community organizations.

“This historic conservation deal changed the course of California’s history,” said Nita Vail, Rangeland Trust CEO. “This magnificent ranch and coastline are forever preserved for current and future generations to enjoy. The Hearsts continue to be tremendous partners and stewards. They are very deserving of our highest honor.”

True stewards of the land, the Hearsts embody responsible rangeland management and conservation in California.

The 11th annual A Western Affair  drew a rowdy mix of cowboys and their California best dressed wives, all fashionista’s, sporting rhinestone accessories around their waists but real diamonds on their fingers.

Its always a family affair, friends of Rangeland Trust, but this year it was held at the historic Old San Simeon Village. The beautiful seaside property owned by the Hearst Corporation is forever preserved with a conservation easement held by the Rangeland Trust.

Preserving land for future generations is not always easy or as rewarding. As we watched the sun set, in the glow of its light, one couldn’t help but feel the spirit of George Randolph Hearst Jr. and how proud he would have been to have witnessed the Hearst Corporation passing the torch for future generations.

Steve Sinton, Rangeland Trust founding Chairman of the Board and San Luis Obispo county rancher said it best,”The Hearsts’ perseverance and dedication to seeing that the ranch was preserved, paved the way for the entire ranching community’s success in conserving the working rangelands so vital to the economic and environmental health of our Golden State.”

And some lucky rancher got to take home the evenings prized possession. A little Australian Shepherd named “Mac.”

Just turn me loose, let me straddle my old saddle
Underneath the western skies
On my Cayuse, let me wander over yonder
Till I see the mountains rise

Poppa, don’t you fence me in 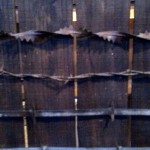 The One, The Many, and the Balance