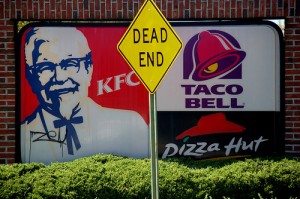 America today is seeing more people being isolated into a world of junk food and unhealthy foods. The U.S is rapidly turning into an unhealthy America with something called a “food desert”.  What’s a food desert? According to Secretary of Agriculture Tom Vilsack, a food desert is a “place where there is not easy access, affordable access, reasonable access to fresh fruits and vegetables — to a grocery store.”

It could be an inner city or a rural town but what they both have in common, besides the low income economy, is their lack of access to fresh produce and to healthy food alternatives.  Instead, convenience stores and fast foods with their highly processed foods, packed with refined sugars, trans fats and preservatives are ubiquitous and commonplace. As a result, families are left with few options to serving nutritious foods and their children suffer the consequences.  With new generations being fed these types of foods, it is only a matter of time  before this growing unhealthy America can see any change whatsoever.

Earlier in Febraury 2010, Mrs. Obama launched Let’s Move, an initiative to promote healthy eating and a fitness lifestyle to help children lead fuller lives and avoid dangerous health conditions and disease caused by the ever growing obesity epidemic in America. Now, she is focusing on bringing commerce and nutrition to these food deserts so that these areas may too flourish with abundance healthy options.

In the video, Obama states:

“With a modest initial investment of about $400 million a year, we’re going to use that money to leverage hundreds of millions of more from private and nonprofit sectors to bring grocery stores and other food retailers to under-served communities all across this country.” 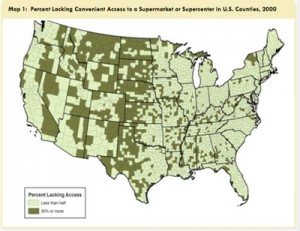 The growth of unhealthy america will not cease if a change is not made.  The change begins with us the people of America.  Seeking other forms of diets and foods can be the very first step or simply informing ourselves of what is out there.  There are healthier forms of fast food we can learn about.  The healthiest fast food can sometimes be found in places we would never imagine such as large festivals like the Coachella Festival which would be a great way to stop unhealthy america from growing.