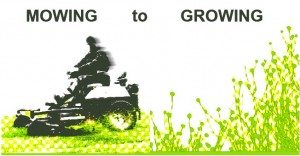 One Prize Mowing to Growing, an eco-contest sponsored by the City of New York Parks and Recreation Department and the American Society of Landscape Architects, created an opportunity for architects, designers, planners, scientists, and other related individuals to “reinvent the American garden.” This design competition called for “creating productive green space in cities,” and they have announced the two first place winners!

The project brief focused on a number of startling research statistics. For example, “North Americans devote 40,000 square miles to lawns, more than we use for wheat, corn, or tobacco…  [also], that Americans spend $750 million dollars a year on grass seed alone while only 2% of America’s food is locally grown, and 12% of every dollar’s worth of food consumed at home comes from transportation costs.” A series of questions focused on how to fix America’s obsession with green grass lawns and how to feed urban areas – a problem that will continue to grow exponentially with a continued increase in population. 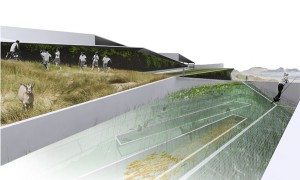 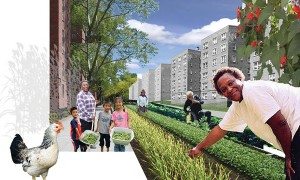 Team 1048 focused more on New York City’s aging demographic with Naturally Occurring Retirement Community Farms, or NORC. Their goal is to keep people over the age of 60 actively integrated into the populace instead of relying on assisted living and retirement home[-]type settings. NORC Farms directly target public housing (where large fenced off lawns are commonplace) by focusing on activating unused space with a 5-phase plan to slowly mesh city and farm together. The team’s submission stated that NORC Farms will “use urban agriculture to transform grass into socially, ecologically, and economically productive space.” It will also “transform the tower in the park into the tower in the farm.”

Overall, more than 200 teams participated in the “One Prize, Mowing to Growing” competition, each with their own plan about how to face issues surrounding urban areas. Whether it is developing a system of levees, integrating farms into a city’s public space, or an even more exotic exploration, “One Prize” has helped to bring attention to an important issue facing cities around the world. Contest winner or not, all participants have the chance to drive or inspire environmentally-friendly change in urban areas to the greater, greener benefit of the entire community.

What will the future hold? Whatever the solution may be, we need to change the way in which we use our green spaces, and contests such as this are a terrific start to get the ball rolling. 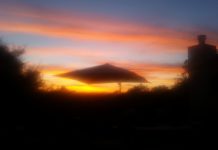 rstBrands In Style In Harmony With The Environment:LuxEcoLiving’s Pick for Best Outdoor Furniture

Money Might Not Grow On Trees, But Our Housing Could!

Got Legs? Get LifeSpan!