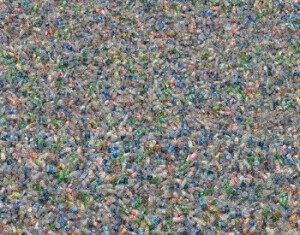 My new hero, Annie Leonard of the internet phenomenon The Story of Stuff, is at it again.  This time, in honor of World Water Day, she has produced a new film called, The Story of Bottled Water.   She writes on her site:

“Imagine I was trying to sell you a sandwich. It’s shrink wrapped in plastic that may leach toxic chemicals, but don’t worry about that. Mine’s still healthier than a sandwich you could make at home, what with all those impurities in your fridge. Now, I’ve got no proof of that, and actually, some people have tested my sandwiches and found that sometimes they have more bad stuff in them than the ones from your own kitchen. But never mind that. Mine’s more convenient. Tastes better too. I swear.

So here you go: one plastic-wrapped, waste-producing sandwich that isn’t any healthier and doesn’t taste any better than the one from your own kitchen. That’ll be $10,000, please.

That preposterous pitch is the truth behind the marketing campaigns that turned bottled water into a $5 billion-a-year industry in the United States alone. Today is World Water Day–a good day to pause and consider the insanity of a global economy where 1 billion people lack access to safe drinking water while other people spend billions on a bottled product that’s no cleaner, harms people and the environment and costs up to 2,000 times the price of tap water.

To mark the occasion, I’m joining with a bunch of North America’s leading environmental groups to release our new film: The Story of Bottled Water. It’s a seven-minute animated film that, like The Story of Stuff, uses simple images and words to explain a complex problem caused by what I call the ‘take-make-waste’ economy. In this case, we
explain how you get Americans to buy half a billion bottles of water a week when most can get it almost free from the tap in their kitchen.

The answer, of course, is you manufacture demand–make people think they need to spend money on something they don’t actually need or already have.

In the last few decades, Coca-Cola, Pepsi, Nestle and other big beverage companies have spent untold millions making us afraid of tap water. They’ve told us that if we want to be sure what we drink is pure and clean–not to mention hip and fashionable–we should buy bottled water. After all, nobody cool or environmentally conscious
drinks tap water, right?

The thing is, there are a lot of inconvenient truths the bottled water ads don’t mention:

• Bottled water is subject to fewer health regulations than tap water. In 2006, Fiji Water ran ads bragging that their product doesn’t come from Cleveland, only to have tests show a glass of Fiji water is lower quality than Cleveland tap. Oops!

• Up to 40 percent of bottled water is filtered tap water. In other words, if you’re concerned about what’s in your tap water, just cut out the middleman and buy a home water filter.

• Each year, according to the Pacific Institute’s Peter Gleick, making the plastic water bottles used in the U.S. takes enough oil and energy to fuel a million cars. And that doesn’t even include the fuel required to ship, fly or truck water across continents and state lines.

• Three-fourths of the half-a-billion plastic water bottles sold in the U.S. every week go to the landfill or to incinerators. It costs our cities more than $70 million to landfill water bottles alone each year, according to Corporate Accountability International.

But there’s good news: People are getting the message. Last year, for the first time this decade, bottled water sales fell–not that much, but they went down. Restaurants are proudly serving tap water, adding carbonization on site for customers who want something fizzy. Consumers who want economy, portability and convenience are switching
to refillable metal bottles.

Still, we’ve got a ways to go until everyone realizes that bottled water makes as much sense as a $10,000 sandwich.

So, if you haven’t already, you can get started by making a personal commitment to drink from the tap.

Then join a campaign for investment in clean tap water for everyone, like those sponsored by Food & Water Watch, Environmental Working, Group or Canada’s Polaris Institute. Work to ban the purchase of bottled water by your school, company or city–Corporate Accountability is helping states kick the bottled water habit–and lobby local officials to bring back drinking fountains.

Together, we can send Coke, Pepsi and the rest of the industry a message as clear as a glass of crystal-clean tap water: We’re not buying into your manufactured demand anymore. We’ll choose our own demands, thank you very much, and we’re demanding clean safe water for all!”

The site seems to be experiencing trouble, probably due to an unexpected influx of traffic, but watch the video here:

Annie Leonard is the author of The Story of Stuff: How Our Obsession With Stuff is Trashing the Planet, Our Communities, Our Health – and a Vision for Change. Her latest film, The Story of Bottled Water, was produced by Free Range Studios and can be found at www.storyofbottledwater.org

Mary Nohr is one of a kind: A mechanic and artist...