Nutmeg and Mace: Two in One 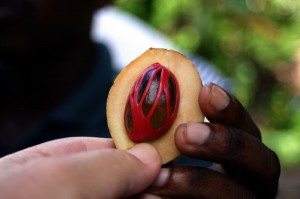 By F.R.E.E Will, LuxEco Advocate, Author of In The Spice Cabinet series

It’s no secret that when plants are harvested for their life sustaining and nutritional qualities that every part of the plant can be used.  Leaves and seeds are mascerated and pulverized respectively to extract oils that are used for everything from skin care to salad dressings (olive, grapeseed, avacado). The fruit from plants are typically harvested as a food source that can be eaten as soon as it is picked. Even the roots of certain plants are harvested and used as is (think ginger and potatoes) or dried and ground to make flour or even a powdered version of your favorite spice that is able to be preserved longer.  Of the various plants that serve multiple purposes, the nutmeg plant is the only plant that yields not just one, but two spices.

Originating from the Indonesian province of Moluccas and cultivated throughout the South Pacific and the Caribbean, the word nutmeg is somewhat misleading.  Nutmeg is actually the kernel of the corresponding fruit produced by the tree.  The actual fruit, also known as the pericarp, is relative in size to a small peach or apricot is edible and is also used to make everything from jams and jellies, to a candied confection and even liqueur.  Upon ripening, the fruit splits open exposing the kernel which is surrounded by a web-like covering called the arillus.  Once removed from the kernel and dried, the arillus is able to be used as a spice that most people know better by the name mace. 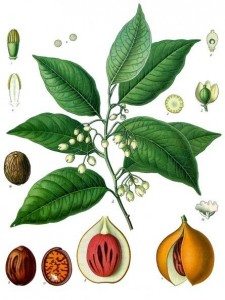 Both the seed and mace share similarities in regards to their chemical make up and even taste with mace having a slightly sweeter and stronger flavor.  The health benefits of both spices, like so many others lend themselves to the easing of a wide range of ailments and other non culinary uses.  One of the more notable benefits is the relieving of indigestion and flatulence and has also been effective in the stimulation of appetite.  Its distinctly sharp, warm flavor has been known to assist in stimulating mental activity including dreams while at the same time relieving stress.  At one point in Medieval Europe, it’s oil being used by Greeks and Romans as a brain tonic, more than likely attributed to the compound Myristicin which has also been to have a psychoactive effect (i.e. hallucinations, sense of euphoria, severe fatigue and drowsiness) when taken in dosages much larger than what is typically used for cooking.  In Arabic nations (at one point the highest importer of the spice), nutmeg is considered and aphrodisiac and is added to coffee and the oil placed on the male genitals (a practice also carried out by 16th century monks) as a means of increasing virility.  Nutmeg in small doses also acts as as a liver detoxifier, having been used in traditional Chinese medicine, and also has been known to dissolve kidney stones thereby improving circulation.

The oil of nutmeg, expelled through steam distillation of grindings, makes up 10 % of the volume and contains the compounds eugenol and camphor, compounds also found in cloves and cinnamon.   Because of it’s volatile make up, nutmeg oil is used in the creation of cough syrup to assist in the alleviating of coughs and colds and general chest congestion.  The oil also has anti-bacterial properties that can help in preventing bad breath and even cavities making it a useful additive to toothpastes and other dental products.  Also when dilluted in sweet almond oil and applied externally is known to relieve achy muscles, joints and even boils. 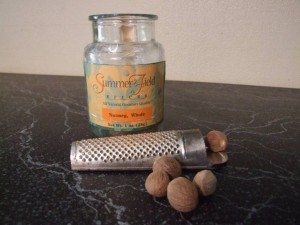 When cooking with nutmeg it is best to buy the seeds whole and grind with a spice grater as needed because it tends to lose its flavor rather quickly.  Be sure that the seeds are heavy relative to their size (most weighing between 7-8g), and it is best not to take liberties in seasoning because too much can overpower any recipie.  With mace, the pieces– blades–should be slightly pliable and range in color from a cinnamon-yellow to orange.  Mace comes in powdered form and like nutmeg needs to be stored in a cool dry place so as to preserve as much flavor (oil) as possible.  For healthier alternatives to the typical holiday fare try pairing it along with cardamom, cinnamon, cloves, star anise to make a chai spice blend to your favorite black or green tea. Or simply add nutmeg or mace to your green beans, rice, or eggs for a spicier kick to your favorite dishes (and of course your favorite desserts).  Until next time, here’s to good health and good eating.

Don’t forget to check out other recipies for nutmeg and mace at About.com.