Someone sent me an amazing article from WebEcoist who presented some of the most moving and beautiful photographs of nature’s awesome phenomenons that have baffled people for eons.  Some of nature’s puzzle have been cracked by scientists who can explain these bizarre occurrences, while others are still mysteries.

Truly fascinating, here are a few, then pop over to WebEcoist to see the 7 (and more) Phenomenal Wonders of the Natural World:

Some scientists have proposed that a combination of strong winds and surface ice account for these movements. However, this theory does not explain evidence of different rocks starting side by side and moving at different rates and in disparate directions. Moreover, the physics calculations do not fully support this theory as wind speeds of hundreds of miles per hour would be needed to move some of the stones.

Wikipedia has some interesting info about these sailing rocks, noting that sometimes they are lot linear and can change course altogether.

When a thick lava flow cools, it contracts vertically but cracks perpendicular to its directional flow with remarkable geometric regularity – in most cases forming a regular grid of remarkable hexagonal extrusions that almost appear to be made by man.

One of the most famous such examples is the Giant’s Causeway on the coast of Ireland (shown above), though the largest and most widely recognized would be Devil’s Tower in Wyoming .

Basalt also forms different but equally fascinating ways when eruptions are exposed to air or water.

Red tides are also known as algal blooms – sudden influxes of massive amounts of colored single-cell algae that can convert entire areas of an ocean or beach into a blood red color.

While some of these can be relatively harmless, others can be harbingers of deadly toxins that cause the deaths of fish, birds and marine mammals.

In some cases, even humans have been harmed by red tides though no human exposure are known to have been fatal.

While they can be fatal, the constituent phytoplankton in ride tides are not harmful in small numbers.

While many see these apparently perfect ice circles as worthy of conspiracy theorizing, scientists generally accept that they are formed by eddies in the water that spin a sizable piece of ice in a circular motion.

As a result of this rotation, other pieces of ice and flotsam wear relatively evenly at the edges of the ice until it slowly forms into an essentially ideal circle.

Ice circles have been seen with diameters of over 500 feet and can also at times be found in clusters and groups of different sizes as shown above.

True to their ominous appearance, mammatus clouds are often harbingers

of a coming storm or other extreme weather system.

Typically composed primarily of ice, they can extend for hundreds of miles in each direction and individual formations can remain visibly static for ten to fifteen minutes at a time.

While they may appear foreboding they are merely the messengers – appearing around, before or even after severe weather.

A circum horizontal fire rainbow arc occurs at a rare confluence of right time and right place for the sun and certain clouds.

Crystals within the clouds refract light into the various visible waves of the spectrum but only if they are arrayed correctly relative to the ground below.

Due to the rarity with which all of these events happen in conjunction with one another, there are relatively few remarkable photos of this phenomenon.

Named after peak-hooded New Mexican monks (lower right above), penitentes are dazzling naturally-forming ice blades that stick up at sharp angles toward the sun.

Rarely found except at high altitudes, they can grow up taller than a human and form in vast fields

As ice melts in particular patterns,’valleys’ formed by initial melts leave ‘mountains’ in their wake.

Strangely, these formations ultimately slow the melting process as the peaks cast shadows on the deeper surfaces below and allow for winds to blow over the peaks, cooling them

Ever wonder the truth about UFOs?

Avoided by traditional pilots but loved by sailplane aviators, lenticular clouds are masses of cloud with strong internal uplift that can drive a motorless flyer to high elevations.

Their shape is quite often mistaken for a mysterious flying object or the artificial cover for one.

Generally, lenticular clouds are formed as wind speeds up while moving around a large land object such as a mountain.

Light pillars appear as eerily upright luminous columns in the sky, beacons cast into the air above without an apparent source.

These are visible when light reflects just right off of ice crystals from either the sun (as in the two top images above) or from artificial ground sources such as street or park lights.

Despite their appearance as near-solid columns of light, the effect is entirely created by our own relative viewpoint. 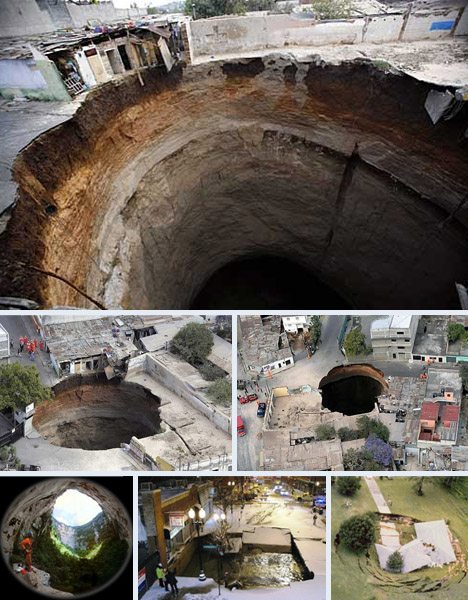 Sinkholes are one of the world’s scariest natural phenomena. Over time, water erodes the soil under the planet’s surface until – in some cases quite suddenly – the land above gives way and collapses into the earth. Many sinkholes occur naturally while others are the result of human intervention. Displacing groundwater can open cavities while broken pipes can erode otherwise stable subterranean sediments. Urban sinkholes – up to hundreds of feet deep – have formed and consumed parts of city blocks, sidewalks and even entire buildings