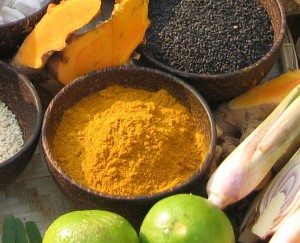 By F.R.E.E Will, LuxEco Advocate, Author of In The Spice Cabinet series

After learning the benefits of so many herbs and spices found right underneath our noses in our spice cabinets, we are ready to explore!

A member of the same family as the more known ginger plant, the rhizome, or root, of the tumeric plant has quite the storied history.

Native to the Indian subcontinent tropical regions of Southeast Asia, tumeric has been used in both ancient Chinese and Ayurvedic medicine for its anti-inflammatory properties and has been used for ailments ranging from jaundice to various forms of arthritis.  Also well documented are the antiseptic properties of the volatile oils contained in tumeric making it quite effective in dealing with skin afflictions from minor cuts to more severe conditions like eczema and psoriasis; not to mention undeniably cheaper than the vast amounts of antiseptic sprays and creams on the market that serve the same function.

Thanks to recent scientific studies within the last few years, we in the Western World are now able to gain a better understanding of what the people of China and India have known for centuries without the benefit of technology to assist them.  Research has allowed us to understand more why tumeric possesses such versatility when it comes to its health benefits.  Like most other foods with health benefits tumeric contains antioxidants, in particular, one known as curcumin.  This particular compound, which also gives tumeric its distinct color, performs a variety of functions once absorbed into the bloodstream which include interacting with the liver to facilitate the production of enzymes that break down fats and sugars.  It also inhibits the production of other liver enzymes which allow free radicals in the body to become cancerous. 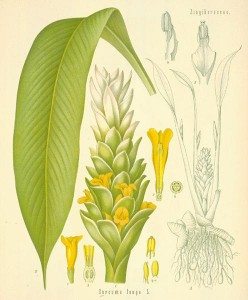 Even more surprising than how curcumin in tumeric benefits the liver are its effects on the heart and even the brain.  The same way the anti-viral properties in a bowl of chicken soup can assist in fighting the common cold, curcumin can help fight heart disease via the clearing of bad cholesterol (LDL). Also of equal importance, it can help fight and perhaps even prevent the onset of Alzheimer’s disease by eliminating plaque that collects in not only the arteries but also along neural pathways, allowing little to no room for the disease to permeate.

So the next time you decide you decide to make that egg salad that everyone seems to just love, or you find yourself wanting to do something different with your stewed vegetables, or baked chicken, try adding a little tumeric.

Editorial Note:With anything in life, consistency is what yields the greatest results, but always in moderation.  Too much of anything may leave you to deal with undesireable effects; so be sure to seek balance in what you do.

Jeff Bridges delivers down home country at the Maverick Saloon