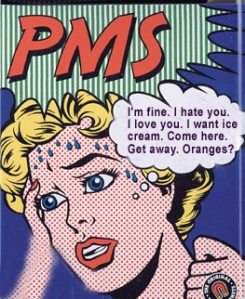 It’s PMS Week.  I cannot tell a lie. I have the chocolate smeared keyboard to prove it.

To help me (and him) through this challenge, last night my sweet boyfriend, James, suggested that we re-watch Pixar’s wonderful “UP.”  He probably thought that if I had something to focus on right in front of me that my head would stop spinning and give him some peace for ninety minutes. Smart man. He’s enjoyed the magic of being Linda Blair’s boyfriend one week every month for the past seven years, so this was an excellent choice.

Have you seen the movie “UP?”   Please say that you have.  It is honestly one of the greatest films EVER. It was a soothing salve for my cranky mood last night (okay, gnawing on a five pound brick of Trader Joe’s chocolate didn’t hurt either). I was able to hormonally cry and blubber, and watching it again reminded James and me of why we loved this film so much when we saw it a year ago.

So, join me on a trip down “Sometimes It Really IS Better To Wait Until a Movie Comes Out On DVD.”  You’ll be amazed and perhaps not surprised, if you have experienced what we did.  Oh, and I think I had PMS this particular day too.

(Please note that this is not one of my usual sunny “Marie Osmond” posts … and I’m gnawing on more chocolate – and soon will switch to salt products – as I conjure up these memories – better/bitter safe than sorry).

Okay, so James and I figured that since we’d waited nearly THREE months to see “UP” that we’d have steered clear of having to deal with the usual onslaught of kids and their parents who can’t (or who choose not to) curb them.

We caught the 1:30 matinee this Sunday afternoon at Bella Terra in Huntington Beach and as we entered the theatre, where the film had already begun, our collective blood ran cold (tum tum TUMMMMM) when we could see the silhouettes of big and little heads staggered throughout the ascending stadium seats.  More frightening than this sight on its own, however, was the apparent fan base of Kate Gosslein’s cockatiel/porcupine hair cut….but hey, we were in the OC.

We were relieved to spy two aisle seats (which I always prefer since I drink my required 140 ounces of water daily) so we grabbed them just as the “do not miss or just kill yourself now” opening of “UP” had begun.  I had heard so much about this wonderful film and I was so happy that I had convinced my 6′5″ boyfriend to go and see it with me.  Movies are a challenge for James and his 6 feet of legs – the seats are never that comfortable, and if we don’t snag the aisle, his knees are usually in his nostrils (or mine) by the half-way point of the film.  But not today!  Nope.  We not only got into this film by the skin of our teeth, but two AISLE seats for me and my boyfriend/giraffe?!  Please….God was smiling down on our lovely Sunday afternoon.

And then it happened.

“MOM-eeeee,” a shrill and loud child’s voice echoed from the other side of the theatre. “Those are CLOUDS!!”

Usually at this point, James lets out a sound that I lovingly refer to as “the flat tire.” You know, like Mr. Ed blowing out a labored sigh from his horse lips so that it sounds like a faulty whoopee cushion.  And it’s always loud enough for the poor sixteen year old who tore our tickets out in the lobby to hear it.

Today, however, it was my turn. I snapped my head toward that child and its owner so abruptly that the crack it made could have been heard in the multi-level parking structure.

“Honey,” he stage-whispered, dripping with sarcasm. “This is what you have to expect at a children’s show…”

GOD. If there’s one thing I cannot bear, it’s ME being quoted back to ME.

James had skillfully waited for just the right moment to throw back in my face the exact sentence I hissed at him during our experience at the stage production of “Chitty Chitty Bang Bang” the week before.

We had been generously given house seats by Richard and Elizabeth Sherman (Richard and his brother, Robert, wrote all of the music for this show and the movie before it) but because we had Chatty Chatty Bimbo and her Costco clothed child sitting right next to us, a boy who snorted like Arnold Ziffle seated directly behind us, and a sugar-induced little girl in the second row who hopped up and down like a Whack-a-Mole every time there was a musical number … as soon as that magical car flew away, we wished we could, too.

This entire evening at the theater was reduced to a stress filled, white-knuckling of our arm rests and my begging James to please stop shushing Chatty Chatty and her mini clone (who, naturally, had the stones to tell him to shut up in full voice). Prozac, take me away…..

And I loved this: Before the stage show began, there was an overhead announcement recited in a “British” accent requesting that no photographs be taken and that if anyone was “enjoying candy wrapped in cellophane wrappers,” that they please open the candy NOW and not during the show.

No mention of not talking during the performance, however.  Could the sound of a candy wrapper crackling honestly be more disruptive to the members of Actors Equity than audience members loudly chatting DURING a performance….come on. Really?

Well, our afternoon date at the movies proved to be just as challenging as our date night at the theater as we listened to the kid way over yonder give us an audio commentary of the entire film (and during the most poignant and heart breaking parts!!). There was also the party of “little girls and their little bladders” seated right behind us who not only kept having conversations with their moms, but got up at least THREE times to pee during the film….and of COURSE re-enacted scenes from “The Miracle Worker” while trying to find their seats when they returned.

“RIGHT UP HEEERRRE…NO….UP and to the LEFT…..not YOUR left, Mommy’s left!!”

(Yes….right behind the nice lady holding the taser gun in her purse…)

“UP” was so incredible and moved me so deeply that I willed myself to not make a scene when these children AND their parents had their respective side bar discussions about what was taking place onscreen (and why and how and who); I would not give my power way that easily or allow them to ruin what I had been looking forward to seeing for months.

I was almost scaring myself when I realized how angry I was becoming, once again, at these parents who were doing NO favors to us or their kids by not insisting, that the kids sit still, be quiet, and enjoy figuring out what was going on in the film on their own.

By the time we left the movie theater, I was so upset and unnerved that James deduced that I, indeed, had PMS and gently guided me out of the theater and to the nearest See’s Candy. And as we got closer to my salvation/lemon truffles, James made a great point.

The current generation of parents is doing their offspring a disservice when they feel the need to explain every little thing to them.  These kids are going to grow up and not know what it’s like to use their OWN minds to assimilate what’s taking place in their lives and the lives, make believe or not, of others.

I’m baffled by this new and desperately hip generation of parenting. When I was a child and given the chance to go to the movies or the theater, I was taught by my parents that attending either was the equivalent of being inside a church; a place of respect and reverence. Not your living room with your Cheeto coated remote and shag carpet.

“UP” had so many deep and thought provoking messages going on and I’m positive that most of what the film was trying to convey was lost not only on the kids, but their parents, who think that what they’re saying is more important or relevant than the often sublime themes going on in this multi-layered and brilliant film. So, ultimately (and sadly), NO ONE gets the REAL messages…only the ones that the parents THINK they know based on hearing (and loving way too much) the sound of their own voices.  What a loss for everyone … why is it so difficult for us to just be quiet and listen?

I loved “UP” – I just wish that the title had one more word in it.

We’ve returned to present time. Please make sure your tray tables and seats are returned to their upright position.

Thank you for allowing me (and my hormones) vent.

I’m battening down the hatches for the week. Screening calls, mainlining more chocolate, buying my very own salt lick…..and, believe me, I’m NOT going to the movies.

All contents copyright © Life Goes Retrograde by Bernadette Bowman. All rights reserved. No part of this column or the related blogs may be reproduced or transmitted in any form, by any means (electronic, photocopying, recording, or otherwise) without the prior written permission of the author.

The Artist: A Review with an extra big shout out to Uggy

“Haha” Your Way to Better Health

To Own a Piece of History: The Old St. Angela Bed...