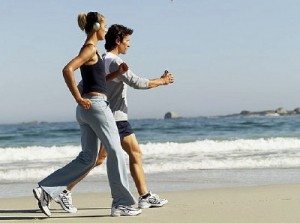 I came across this MSN health article on walking and, as an avid walker myself (I walk an average of 12 miles per week), I had to share what I learned. Regular brisk walking can do wonders for your health, and it’s so simple! No gym fees, nowhere to drive to, no certain time to be at that aerobics class. You can just walk out the door at your favorite time of day, pop in a set of headphones, and tour the neighborhood. Research shows there are 8 incredible benefits to this type of moderate exercise.

For one, it significantly reduces the risk of type 2 diabetes. A British study recently found that brisk walking improved insulin sensitivity in people with a family history of the disease.

Second, walking increases libido in women. In one recent study, a group of middle-age women who got moderate exercise on a regular basis reported greater sexual desire and better sexual satisfaction than those who did not exercise.

Third, plain and simple, it spares you that costly gym membership! Walking is free! Pounding the pavement for just 150 minutes per week (that’s just over 20 minutes per day) can help you manage stress and prevent heart disease…and leave an extra chunk of change in your wallet.

Fourth, it can empty out your medicine cabinet. The National Walkers’ Health Study pooled 32,000 women and 8,000 men for a report. Their data shows that people who go for a few longer weekly walks, rather than several shorter walks, tend to use less medication. Whatever they are getting from those longer walks is remedy enough to keep the doctor away.

Fifth, walking can help fight fibromyalgia, a chronic condition that effects more than 4 percent of the population. A study done over 18 weeks showed that women from the ages of 32 to 70, who walked and stretched 3 times per week, felt significant improvement in mental capacity, and were less weary and fatigued.

Sixth, it can help you fight breast cancer. Research published in the Journal of Clinical Oncology reports that women who go for regular walks after a breast cancer diagnosis are 45 percent more likely to survive than those who are sedentary. A Yale study shows that getting exercise before a diagnosis proffers a 30 percent greater chance of survival.

Seventh, brisk walking can significantly lower the risk of stroke. The University of South Carolina studied 15,000 women and 46,000 men over 18 years and found that those who walked 30 minutes five times per week lowered their risk of stroke by 40 percent.

Eight, walking can jog your memory. A study done by Italian researchers discovered that, out of 749 people lacking cohesive memory, those who walked most vigorously reduced risk of getting dementia by 27 percent. They think this is due to an increased flow of blood to the brain, which is resultant of moderate exercise.

IF THIS GUITAR HAD EYES: ZHENYA GERSHMAN’S PORTRAIT OF BOB DYLAN