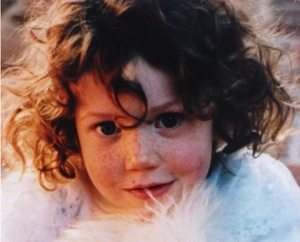 By Nancy Chuda, Founder of LuxEcoLiving.com

Tonight, Jim and I were guests on “Toxic Childood” a CNN special report hosted by Sanja Gupta MD.

For the past fifteen years, we have been writing a book which we feel, when published, will promote greater environmental health reforms for children.

The Flower That Shattered The Stone, is a memoir that details the death of our daughter, Colette, from cancer; the launch of The Colette Chuda Environmental Fund and the founding of Healthy Child Healthy World; the groundswell of scientific research in the past decade on environmental toxins and their effect on children; and the growth of the grass roots political movement to protect children against these assaults.

In memory of Colette and for the millions of parents who are still searching to find clues as to why their childrens health is being impacted,  we hope Colette’s story will inspire truth from transparency and create a healthier world for all children. 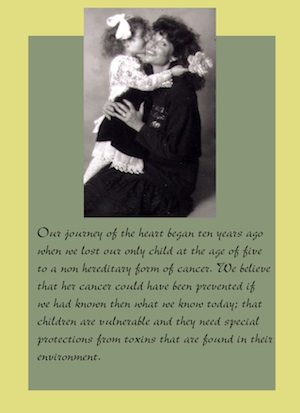 Every day of our daughter Colette’s life was a gift.  We weren’t young parents, and her arrival marked the start of a new and joyous chapter in our lives that more than fulfilled our deepest yearnings for a family.  I was 39 when she was born, after a satisfying career as a broadcast journalist. It was a second marriage for my architect husband, Jim, who was six years my senior and had two teenage children.  But then tragedy struck.  At age four, Colette was diagnosed with Wilm’s tumor, a rare form of cancer.

When children are stricken with cancer you fight for their lives.  Your heart grows cold at the thought that they might die.  The battle you wage is equal to all the world wars that have ever been fought.  To see children clinging to their mother and father for life, to gaze into their eyes and see hope dwindling… to feel their confusion when words can no longer be uttered. . . to watch as trust, the very bond that glues them to our hips, slowly slips away.  It is at these moments that you wish you had never been born, never to bear witness to such cruelty.

After a year long struggle to save her life, we lost the love and light of our lives.  Colette was five years old. Nineteen years have passed since her death, and we miss her every single day.

As parents, we believed intuitively that something in the environment triggered our daughter’s cancer. In our journey to uncover what killed our little girl, we realized that all children’s health is at risk.  Their future–our future–is being jeopardized by the environmental assaults they face, beginning in the womb, in early childhood, puberty and beyond.

But at the time of our daughter’s illness, we looked in vain for any clues to the cause of her condition.  Much to our surprise, we found little scientific research existed regarding the link between the growing incidence of childhood cancer and environmental toxins.  We discovered that virtually all of our environmental protection standards in the United States were based on research that measures the potential effects of carcinogens on an 155-pound adult male.  This didn’t make any sense because children are not simply little adults.  With their quick heartbeats, fast growing organs and super charged metabolisms, they absorb proportionally more pollutants, making them much more vulnerable.

We began to think that if the gap in research on environmental toxic impacts on children could be filled, perhaps more appropriate protection standards could be set, and the growth in the incidence of childhood cancer might be checked.  In our grief, we decided to turn our pain into a passion to help protect other children so that they would not have to suffer her fate and that other parents could avoid what we went through.  Within a month of her passing, we founded The Colette Chuda Environmental Fund, which has  sponsored several breakthrough studies into environmental toxins and their effects on children.  A year later, we launched the Children’s Health Environmental Coalition (CHEC), which evolved into Healthy Child Healthy World, a nonprofit organization that is now the nation’s leading charity  devoted exclusively to protecting children and their families from toxins.

Turning my private anguish into a positive activism was something I learned from my mother, Lenore Breslauer, who taught me that ordinary individuals working together can make a difference even when they‘re up against the rich and the powerful.  In 1967, at the height of the Vietnam War, she co-founded Another Mother for Peace.  Using just the telephone and postcards–without the benefit of the Internet, faxes or email–my mother and her friends built-up a world famous anti-war organization that grew to have a 380,000 person mailing list, and its logo of a sunflower bearing the message “War is Not Healthy for Children and Other Living Things” became an internationally recognized symbol for peace.

Ironically, Jim and I had been environmentalists long before Colette fell ill.  He was an award-winning “green” architect before it become fashionable.  During my broadcasting career for KABC-TV in Los Angeles in the late 1980s,  I was a volunteer with Mother and Others for Pesticide Limits (which later became known as Mothers and Others for a Livable Planet), which was co-founded by Meryl Streep and Wendy Gordon Rockefeller.  When Colette was first diagnosed with Wilm’s tumor in 1990, I was in the middle of producing a star-studded concert for ABC featuring my best friend, Olivia Newton-John, Meryl Streep, Cher, Bette Midler, Goldie Hawn, Lily Tomlin and Robin Williams, to benefit California’s Big Green Initiative.

We had been so careful as parents, cooking only organically grown foods, yet despite our best efforts, we could not shield our child from the man-made poisons that permeate our environment.   When I was pregnant, the cozy apartment we lived in was fumigated without our consent.  We didn’t think anything of it at the time and had no reason to question our manager’s assurances that we could safely return after a few days.   But once Colette was diagnosed, we began to wonder if maternal exposure to these potent chemicals, which we later discovered contain known carcinogens, had altered Colette’s genetic makeup and activated the growth of the deadly tumor while she was gestating in my womb.

Years after our daughter‘s death, our darkest suspicions were confirmed:  a 1995 Brazilian study in The American Journal of Epidemiology revealed that exposure to pesticides in utero often appears as Wilm’s tumor in the 48th month–and Colette was diagnosed when she was exactly four years old.  We’ll never know for certain what happened to Colette, but tests did rule out that it was genetic, which led us to believe it had to be environmentally caused–and could have been avoided if we had only known.

Jim and I survived our loss  by doing everything we could to protect other children from this threat and alert parents to the invisible dangers posed by chemicals, many of which are ubiquitous and cumulative.  In the early years after Colette’s passing we funded epidemiological  studies with Frederica Perera, a professor at Columbia’s Mailman School of Public Health, who is a highly regarded investigator of the effects of environmental hazards. Her first study conducted in Krakow Poland examined how certain chemicals in cigarette smoke might cause cancer. She began using sophisticated molecular techniques to measure compounds called polycyclic aromatic hydrocarbons, or PAH- which are plentiful in tobacco smoke- in the body.  Perera found that after entering the lungs the compounds pass  into the bloodstream  and damage blood cells, binding to their DNA. 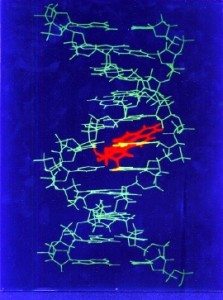 Her research led to what she thought  was the most perfect pristine blood. The umbilical cord of a newborn. What she found  was shocking. The precious samples were tainted by a multitude of chemicals which were being passed from mother to child during pregnancy.

This initial CCEF  research later revealed that chemicals like PAH have now been replicated for more than two hundred compounds. These include PCB‘s, chemical coolants that were banned in the United States but have persisted in the food chain; BPA and phthalates, used to make plastics more pliable, which leach out of containers and mix with their contents; pesticides used on crops and on insects in the home; and some flame retardants  which are often applied to upholstery, curtains and other household items.

Years later and through Perera’s original research, we would learn that fetuses and newborns lack functional enzymes in the liver and other organs that break down such chemicals. Animals studies in the past several decades have shown that these chemicals can disrupt hormones and brain development. There is some evidence that they may have what are called epigenetic effects as well, altering gene expression in cells, including those which give rise to eggs and sperm, and allowing toxic effects to be passed on to future generations.

Years later, researchers at the National Institutes of Health and key universities across the country struggled to understand what was causing an array of seemingly unrelated but disturbing phenomenon–the skyrocketing incidence of childhood cancers, asthma, autism, learning disabilities, reproductive disorders and infertility–and their growing alarm when one study after another confirmed what Jim and I intuitively knew all along.

Research revealed that these ominous trends are being fueled, at least in part, by the chemical pollutants that pervade every aspect of our lives, from the noxious fumes belched from industrial plants, trucks and cars that dirty the air we breath, and the pesticides, herbicides and fungicides that saturate the soil of our farmlands, contaminating groundwater and seeding the clouds when that water evaporates, and leaving residues on our food, to the plastics, solvents, synthetic fibers and cleaning agents we routinely use.   Children are the most vulnerable to the effects of these lethal contaminants.   They drink more water, they have a higher metabolism and their diets are different: they consume vast quantities of fruit juice and vegetables, much more so than adults, which are common vehicles for pesticide contaminants.  Because children’s biological systems are just forming, the proliferation of their cells as they grow is being impacted by these cumulative exposures.

And we now know that even low dose exposures to chemicals we once considered harmless, particularly during fetal development and in early childhood, can have a profound and lasting effect. Yet the federal government does not protect children from exposures to these man-made carcinogens, neurotoxins and endocrine disrupting chemicals.  “We’re conducting a massive toxicological experiment,” Dr. Philip Landrigan, who is considered the father of children’s environmental health, has often warned, “and our children and their children are the unwitting guinea pigs.”

• Natural Resources Defense Council:  Handle With Care:  Children and Environmental Carcinogens (1994).  This study reviews what is known about childhood exposures to carcinogens and the adequacy of government efforts to protect children from these exposures.  The report examines information on nearly 400 cancer-causing chemicals, many of which are present in our homes and schools.

• Columbia University:  Air Pollution and Cancer (1994).  Dr. Frederica Perera, one of the nation’s leading pioneers of bio-medical research, measured the effects of severe air pollution on the developing fetus and the extent to which carcinogens are transferred from the mother to her fetus.

• Columbia University:  The Effects of Air Pollution on the Developing Infant (1996).  Dr. Perera will continue her research on the US’s “hot spots.”

Healthy Child Healthy World (HCHW) continues to be a leader in children’s health advocacy and helping parents find common sense solution to protecting their families from toxins in the environment.

The Hidden Dangers in Soy