How to navigate high fructose corn syrup and sugar substitutes to avoid harmful artificial sweeteners in favor of plant based alternatives. 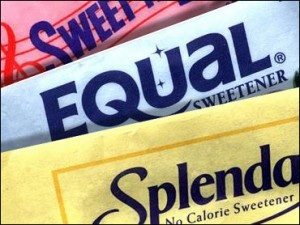 What if products that contain high fructose corn syrup or artificial sweeteners, which are marketed to assist in living a healthier lifestyle, are actually the ones making us sick? As of 2007, American consumers were spending 21 billion dollars 21 billion dollars annually on diet, or low calorie, drinks. From the outsider perspective, this still seems like progress compared to the alternative statistic, with 64% of Americans qualifying as overweight or obese. But what if you found out that the sugar alternatives that many diet products promote are not only ineffective as weight loss methods, but are also dangerous to your health?

With all of the different companies and chemicals carrying different names and ingredients, we thought we’d break it down for you (with the help of the girls from the New York Times Bestselling book, Skinny Bitch).

This sweetener, found in processed foods, fruit drinks, and sodas since the 1970’s, is thought of as a safe sugar alternative by many because it is advertised as “made from corn.” However, over time, fructose sugars such as high fructose corn syrup can have effects on your metabolism leading to weight gain and obesity, high triglyceride levels, hypertension, and type 2 diabetes.

This sucker, found in both NutraSweet and Equal, is probably the worst, and as such the most talked about. There are even multiple support groups that have been founded for those who have suffered at the hands of this chemical.

The FDA lists 92 side effects in conjunction with this chemical bad guy, some of the more notable ones including Alzheimer’s, mental lesions, and interestingly enough, weight gain.

If those aren’t enough to turn you off from your morning Diet Coke, then maybe this gross little factoid will be: one of the aspartame components is methyl alcohol, which, when entering the body in this form, converts into formaldehyde. Not something we tend to want swimming around our bodies!

Another danger, specific to Equal, is the fact that it also has phenylalanine in it. Some of you neuroscience buffs might be saying, “but phenylalanine is an organic compound which occurs in the brain!” And you would be correct, however, in high doses phenylalanine can increase a risk of seizures and lead to depression and schizophrenia.

This artificial sweetener is made of saccharin, an ingredient that has been controversial for decades due to the fact that it is a coal-tar compound.

Often touted as the “safest” sugar alternative, this chemical compound is 98% pure. Which, naturally, leads people to wonder, what is in the rest? The other 2% is composed of a combination of heavy metals, methanol, and arsenic. Some of its side effects include: damage to the immune and reproductive systems, and swelling of the liver and kidneys.

As if all of this weren’t convincing enough, Skinny Bitch packs the final punch for its readers with a friendly reminder that artificial sweeteners are highly acid forming, and it is accepted commonly that cancers thrive in acidic environments.

Reconsidering your “fake sugar” habit yet?

This herb from South America is a relatively new addition to the list of sugar alternatives. Once a dietary supplement for weight loss, refined parts of the leaf have now been FDA approved as sugar substitutes, and because the body does not metabolize the glycerides in it’s refined state, it has zero caloric intake.

Luo Huan Guo is a fruit from the cucumber and melon family. Grown in Guangxi Province in the People’s Republic of China, it was once used as traditional medicine, however, it’s sweet sugar-like juices are now being mainstreamed as sugar alternatives.

Ol Jogi Conservancy Kenya: The Ultimate in Luxury for a Life...